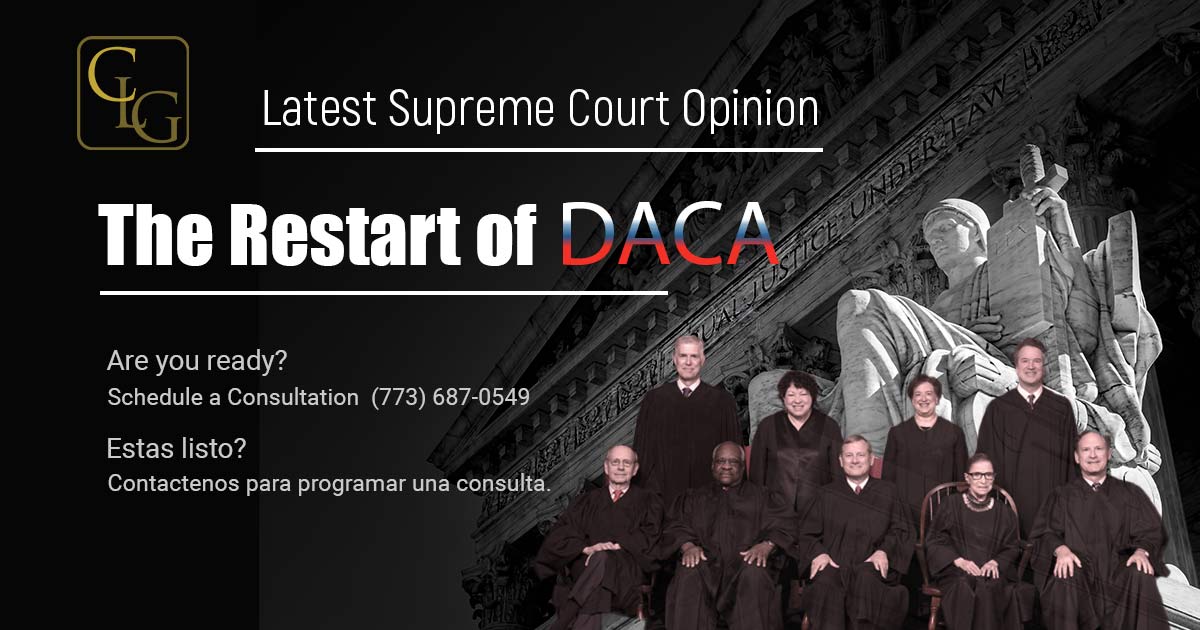 Looking for the latest DACA update? Click here to visit our DACA update page or Call Cipolla Law Group at 773-687-0549 for a consultation. Our Chicago Immigration Lawyers have over 30 years combined experience and speak Español, Chinese, French, Italian and Portuguese.

On Thursday 6/18/2020, the Supreme Court released their decision in Department of Homeland Security v. Regents of Univ. of Cal. (18-587) finding that DACA was improperly rescinded. So, where do we go from here?  Does that mean DACA is revived after its rescission in June 2017?  The answer is YES….for now!

How did this legal battle on DACA begin?

In 2017, the new Trump administration began efforts to rescind DACA, taking the position that the program had been created by the Obama administration “without proper authority.” The Acting Secretary of the Department of Homeland Security (DHS) announced that the program would begin to be phased out. However, multiple groups of plaintiffs, ranging from individual DACA recipients States, to the Regents of the University of California and the National Association for the Advancement of Colored People (NAACP) immediately challenged DHS’s action in the U.S. District Courts. All the plaintiffs in these cases argued that the DHS’s rescission of the DACA program violated the Administrative Procedure Act (APA) and infringed the equal protection guarantee of the Fifth Amendment’s Due Process Clause.

Rescission of DACA in violation of Administrative Procedure Act

The APA governs the procedures that must be followed by federal agencies when making rules. The agencies’ actions must not be “arbitrary and capricious” and are subject to review by the courts. In other words, courts can overturn agency rules if they did not comply with the APA procedural rules and find the underlying rationale or factual assertions supporting the rules to be unreasonable.

What was the Respondent’s Position?

The individual DACA recipients, the Regents of the University of California, and the NAACP argued that the rescission of DACA was arbitrary and capricious in violation of the APA and that it infringed the equal protection guarantee of the Fifth Amendment’s Due Process Clause. Essentially, they argued that the Acting Secretary of DHS failed to consider important aspects of the program before deciding to rescind the DACA program.

What was the Trump Administration’s Position?

Trump administration argued that the rescission of the DACA by the DHS was lawful and was not arbitrary or capricious.

Majority opinion in the Supreme Court?

Ultimately, the decision was a 5-4 ruling with Chief Justice Roberts and Justices Ginsburg, Sotomayor, Kagen, and Breyer in the majority. The majority held that the rescission of the DACA program was unlawful because it was arbitrary and capricious, thus violating the APA.

What’s next for DACA recipients and applicants?

Due to the Supreme Court opinion, DACA is now in effect.  Those who want to apply for DACA should find out if they are eligible and be ready to file. However, it’s only been a day since DACA has become effective again, we are awaiting for guidance from the United States of Citizenship and Services (USCIS) on whether they will formally announce they are receiving new DACA applications or if the Trump Administration will issue another executive order or a legal challenge.

Contact an experienced Immigration Attorney for your DACA application

If you want to file a DACA for yourself or a family member, and want to know how we can assist you and your family, please contact us to schedule a consultation today.  Our Immigration attorneys speak Spanish, Chinese, French, Italian and Portuguese.