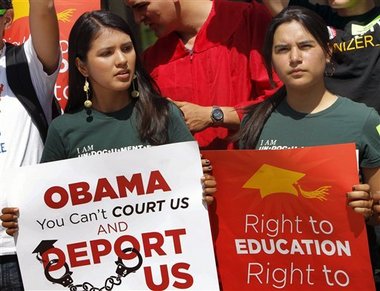 As many people know by now United States Citizenship and Immigration Services (USCIS) Secretary Napolitano and President Obama announced on June 15 that effective immediately young persons in the U.S. without status are eligible for deferred action for a period of 2 years.  The requirements are listed below:

Under this directive, individuals who demonstrate that they meet the following criteria will be eligible for an exercise of discretion, specifically deferred action, on a case by case basis:

As an Immigration Lawyer, I am of course excited that the huge immigration problem in the U.S. is at least being looked at by our politicians.  However, we do not yet have a lot of details and my main concern is that this is a kick the can down the road sort of thing.  In other words, after the election maybe it is something that will be addressed, or perhaps not.  USCIS describes deferred action as not providing status, but essentially a wait and see mechanism to allow persons in the U.S. to work while USCIS figures out what to do next.  So these young persons are not removable but really don’t know what to expect in the future.  It is great to see that a child that was brought here illegally without really any say and has grown up “American” can at least stay in the U.S. for a couple of more years.  However, on the other hand, the immigration situation has been around for many years and both sides of the aisle have had plenty of time to address this important issue.  Some immigration lawyers think that the deferred action announcement is a precursor or message that something more is coming.  However, I am skeptical that something more meaningful will occur prior to such a sensitive issue prior to an election.   As more details become available we intend on blogging about this exciting issue.  Of course if you have questions on whether you would be eligible for this type of relief, I strongly suggest contacting an experienced Immigration Lawyer.  We are located in Chicago, but represent clients in their immigration matters throughout the United States and world.