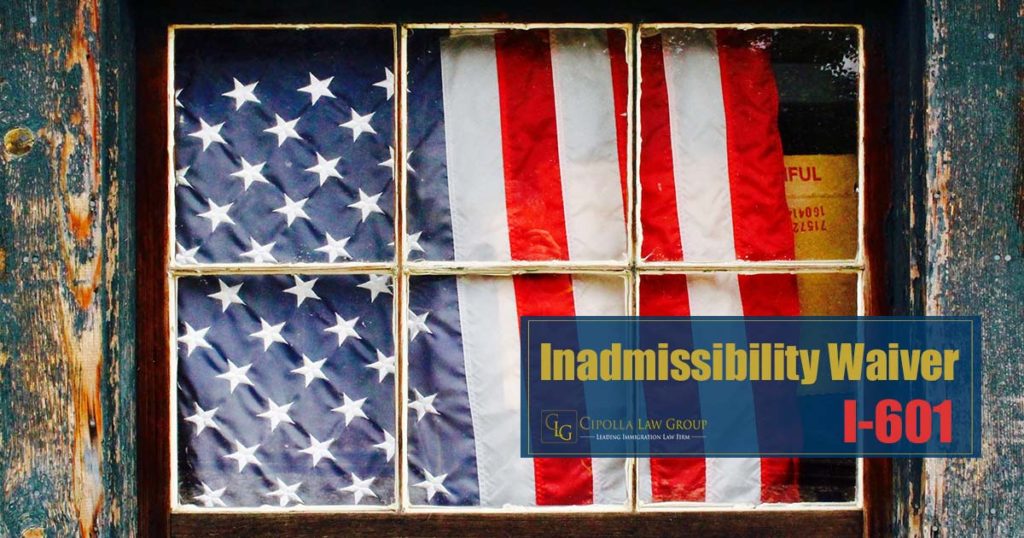 I-601 Inadmissibility Waivers are for someone who wants to enter to the U.S. but is not eligible to do so because of his/her past immigration, criminal or personal history in the United States. I-601 waiver is filed overseas, typically after an approved I-130 (petition for immediate relative), I-140 petition for an alien worker, or I-129F (Fiancé Visa) or an interview at an oversea Consulate.  In some cases, an I-601 waiver can be filed when deemed inadmissible during the adjustment of status process inside the United States.

Who are eligible for I-160 Inadmissibility Waivers?

A foreign national that is inadmissible for certain grounds of inadmissibility may seek a I-160 inadmissibility waiver in order to enter the U.S. There are many reasons why a foreign national is inadmissible making him/her not eligible for an immigrant, non-immigrant visas or to adjust status to lawful permanent residence.  However, the law provides certain relief to “waive” or “forgive” a person’s past or current situation that prohibit him/her from entering to the U.S. if they can prove the following waivable grounds.

Congress has granted Immigration and the Attorney General discretion to waive certain grounds (reasons) for inadmissibility. There are many grounds why a foreign national may be inadmissible and need to seek a I-601 Inadmissibility Waivers.  Typically, they include but are not limited to the following:

If you entered the U.S. without inspection and legal admission into the U.S. or as commonly described as “entering without paper”, you will be inadmissible and subject to either a 3 years or 10 years bar from entering the U.S. in the future.

Who can apply for I-601 waiver under this ground?

Spouse or child of a U.S. citizen or permanent resident, or fiancé of a K visa petitioner may apply for I-160 waiver if they also meet the following requirements.

What are the requirements of this waiver?

You must prove “Extreme Hardship” on your U.S. citizen or permanent resident spouse or parent(s) or K-1 petitioner if you were to denied entry to the U.S. or the qualifying relative moved abroad.

Such as having a communicable disease such as HIV infection or Infectious tuberculosis; failure to receive vaccinations against certain vaccine-preventable diseases; Physical or Mental Disorder and behavior related to that disorder; or Persons determined to be drug abuser or addict.

Persons likely to be considered as becoming a charge upon the public. The term public charge describes persons who can not support themselves and who depend on benefits that provide cash such as the use of Medicaid or other government funds to pay for long term care. It is important to note that receiving food stamps alone or other non-cash programs will not generally affect a person’s immigration status. The criteria for determining “public charge” is complex.

A I-601 Waiver is required if you have a history of:

Persons committing crimes of moral turpitude are inadmissible. A crime of moral turpitude is “conduct which is inherently base, vile, or depraved, and contrary to the accepted rules of Morality….” Immigration generally does not list specific crimes as moral turpitude, but rather is the “inherent nature of the crime as defined by statute and interpreted by the courts as limited and described by the record of conviction” Some examples of Crimes of Moral Turpitude are:

We have extensive experience helping documented immigrants to win their I-601 waivers and be united with their families in the United States. Check out our sample approved I-601 case below and we look forward to representing you.