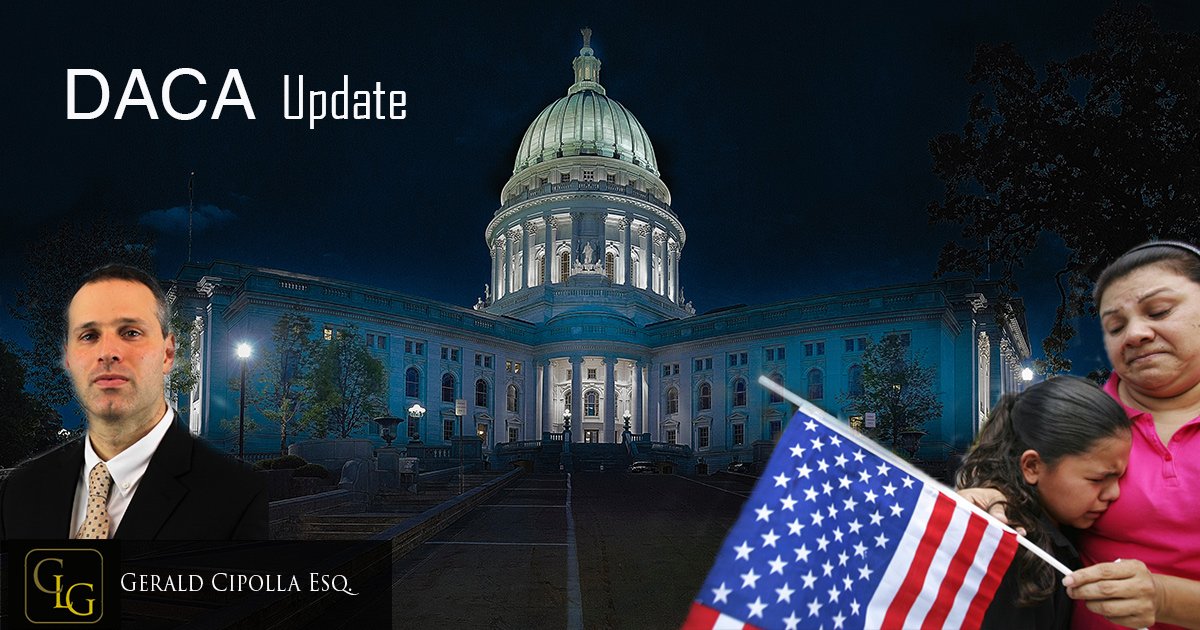 Get DACA updates from a trusted Chicago Immigration Lawyer

Click here to get the latest update on DACA from our Chicago DACA Immigration lawyer Blog posts!

Other Important DACA updates from our Chicago DACA immigration Lawyer

* As the rules and legality of DACA changes rapidly, some of the information below is out of dated.

In an August 31, 2018 opinion, the U.S. District Court for the Southern District of Texas refused to issue a preliminary injunction that would stop the processing of DACA renewal.  This means the current situation regarding DACA renewal remains unchanged since our last update on August 7, 2018.

Renew your DACA as soon as possible

If you have an approved DACA application that needs to be renewed, you should do so as soon as possible.  Also, you should not travel outside of the U.S. as there is no guarantee that you will be allowed to re-enter the U.S.

Other options beyond DACA

If you are undocumented and DACA is not an option for you, you should seek help from an experienced immigration lawyer.  There maybe options available to you such as I-601 Inadmissibility Waiver, I-601A Provisional Waiver or other humanitarian based protections.  At Cipolla law group, we have excellent record of helping undocumented immigrants to gain their legal status in the U.S.  Contact our immigration law firm today for a confidential consultation.

The Deferred Action for Childhood Arrivals (“DACA”) is a program that was implemented during the Obama Administration in 2012 that offers renewable, 2-year grants of deferred action to certain undocumented immigrants who entered the United States as children.  Under DACA, people who immigrated to the US when they were younger than 16 and have lived in the U.S. continuously since 2007 are eligible to defer deportation, attend school, and receive two-year work permits.  Around 800,000 individuals have received DACA.

Can I apply for DACA if I meet all the DACA requirements?

Based on the August 3, 2018 U.S. District Court’s order, the USCIS is still accepting and processing DACA renewal applications for eligible DACA recipients who have previously been approved for DACA.  However, if you do not have a DACA or have never applied for DACA, you will not be able to file a DACA application at this moment as the USCIS is not accepting new DACA cases. If you are undocumented and DACA is not an option for you, you should consult with an experienced immigration lawyer and find out what other immigration options are available for you such as a I-601 Waiver, I-601A Provisional Waiver or other humanitarian based visas.

September 18, 2017
The National Association for the Advancement of Colored People (NAACP) filed a lawsuit challenging the rescission of the DACA program (NAACP v. Trump).

August 3, 2018
U.S. District Judge John D. Bates reaffirmed the court’s conclusion that the DHS’s September 2017 decision to rescind the DACA program was unlawful and that the Trump Administration must fully restore the DACA program.  Thus, it denied the government’s motion to reconsider the Court’s April 24, 2018 order.

August 6, 2018
Attorney General Jeff Sessions issued a statement in response to the Court’s August 3, 2018 order, stating that the “Department of Justice will take every lawful measure to vindicate the Department of Homeland Security’s lawful rescission of DACA.”

August 23, 2018 – What could happen?
The D.C. District Court delayed the implementation of the order for 20 days until August 23, 2018 to allow the government to determine whether it intends to appeal the Court’s decision and seek a stay pending appeal.  This means that the DHS September 5, 2017 memorandum rescinding DACA will be vacated on August 23, 2018 unless the government appeals the decision and/or obtains stay of the court’s order pending appeal.  If the court’s order goes into effect on August 23, 2018, the original DACA program will be restored in full and USCIS will be required to accept both new DACA application and DACA renewals.

If you entered the U.S. without inspection when you were a child and want to find out whether you’re eligible for DACA or other forms of immigration benefits, contact our Chicago DACA lawyer for a consultation. While there are many uncertainties about DACA, we are hopeful that there will be a permanent solution for DACA recipients or individuals who are in similar situation. Also DACA provides a certain degree of benefits but there might be other immigration options available to you. Contact our Chicago Immigration lawyers today for a detailed and confidential consultation. We are located in downtown Chicago and Lincoln Park area. We speak Spanish, Cantonese and Mandarin Chinese.