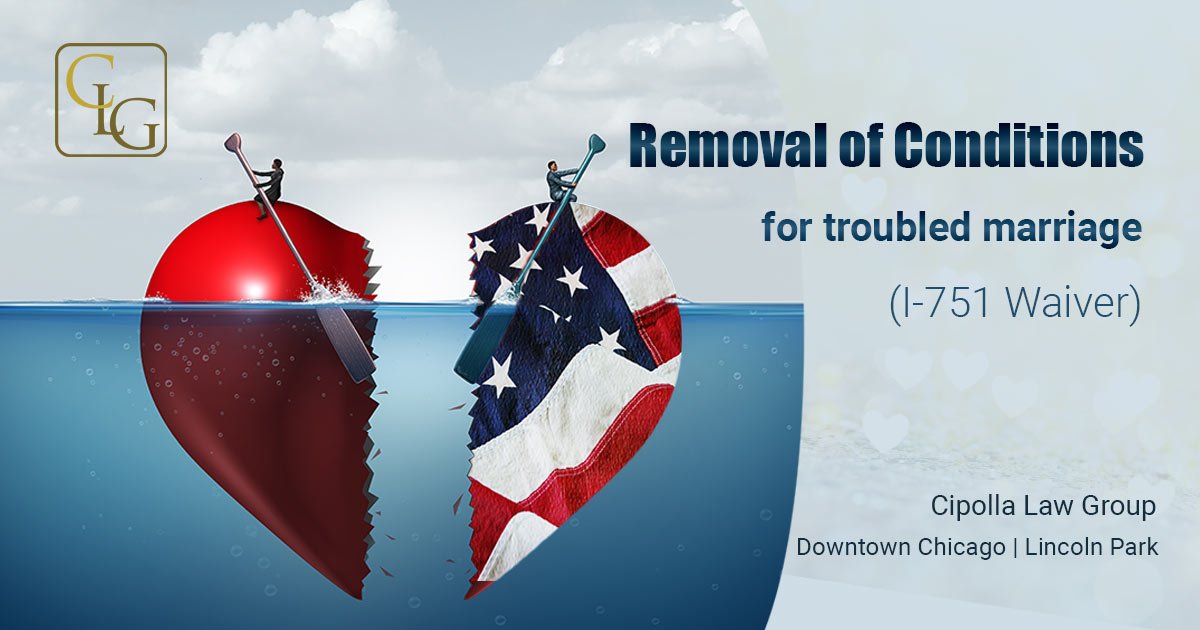 Often times a *Conditional Resident may feel trapped in a troubled marriage due to a false belief that they need their American spouse to help them to become permanent residents by way of Removal of Conditions I-751.

The Removal of Conditions filing (I-751) is an Immigration petition typically filed jointly by the American Spouse and the conditional resident spouse. The effect of an approved I-751 is to remove the conditions of the green card based on marriage, thus making the applicant a permanent resident thereafter. However, when there is abuse or a marriage just will not work, how can a conditional resident spouse overcome this requirement of joint filing? Under certain circumstances immigration system allows for a waiver of the joint filing requirement based on entering the marriage in good faith, abuse, or extreme hardship.  This article will address what is required for the removal of conditions waiver process, as well as who qualifies for it and what you may need to prove your I-751 case.

*someone who gains his/her U.S. residency via marriage with a U.S. citizen or permanent resident before their 2-year wedding anniversary.

Background of I-751 Waiver

In the United States immigration process, if a foreign national obtains residency based on marriage to a U.S. Citizen or Permanent Resident before their 2-year wedding anniversary, he or she will receive conditional residency instead of permanent residency.  This means that the foreign national’s green card will expire within 2 years of their residency being approved and they will need to apply for the removal of conditions 3 months before the expiration date of the green card.

Who qualifies to remove conditions without spouse/I-751 Waiver?

Conditional residents may request a I-751 waiver without the spouse under the following situations:

Contact a Chicago Immigration Lawyer to handle your I-751 Waiver

Whether you are a divorcee or anticipating a divorce, we can help you to remove your conditions on your conditional residency. We have excellent track record on helping clients to become permanent residents. Contact our Chicago Immigration Attorneys today to schedule a consultation.