Are you in the U.S. and in fear of danger when returning to your home country?  Asylum is a form of humanitarian relief program offered by the Department of Homeland Security. It is a discretionary form of immigration relief (protection) granted to foreign nationals who flee their home country and seek temporary shelter and aid in the United States.

Nominated as Top 10 Best Immigration Law Firm, we have over 30 years of combined experience helping immigrants to make America their homes. We have excellent approval and reasonable fees. Call 773-687-0549 or contact us for a consultation. We speak 中文, español, français, italiano and Portuguese.

What is Affirmative Asylum?

There are two ways to obtain asylum in the United States, namely affirmative asylum and defensive asylum. Affirmative asylum is for someone who is already in the U.S. and can timely file asylum within one year of his/her last arrival to the U.S. Sometimes, the one year rule can be waived if you can show that there are new circumstances that substantially affect your eligibility to apply for asylum. For example, when you first enter the U.S. your home country was peaceful and you were not under any persecution or in danger. However, after you arrive to the U.S., a civil war breaks out and you can not return to your home country because your faith or political connection is now considered a threat to the country.

How do I file an Affirmative Asylum?

To be eligible for asylum, you must prove an inability to return to your home country because of past persecution or a well-founded fear of future persecution based upon your race, religion, nationality, membership in a particular social group, or political opinion. Asylum should be filed within your first year of arrival in the United States. Convictions of an aggravated felony or being considered a danger to national security in the United States may make you ineligible for Asylum. However, Convention Against Torture Act or Withholding of Removal may be the alternative forms of relief.

What is Defensive Asylum?

What to expect during an Asylum Interview?

Your interview will generally last at least an hour, although the time may vary depending on your case.  You will be asked to take an oath promising to tell the truth during the interview.  Your interpreter will also take an oath promising to interpret accurately and truthfully.  The asylum officer will verify your identity, ask you basic biographical questions and the reasons you are applying for asylum, and questions to determine if any immigration or criminal history will prevent you from applying for or being granted asylum.

The information you share with the asylum officer is confidential.  In general, information related to your asylum claim cannot be shared with third parties without your written consent or specific authorization by the Secretary of Homeland Security.

If you have hired an immigration attorney for your asylum application/interview, you and your attorney will have time at the end of the interview to make a statement or add any additional information.  A decision on your case will not be made at the asylum interview.

Can I bring an interpreter to my Asylum Interview?

You should bring an interpreter if you do not speak English well enough to be interviewed in English during your Asylum interview. You will then be interviewed through an interpreter.  Generally, the Asylum Office does not provide any interpreters during the asylum interview, except for special circumstances where USCIS makes an exception such as during a pandemic (COVID) or if you are hearing-impaired, where a contracted interpreter will be provided to you free of charge if you speak one of the languages spoken by their interpreters.

Assuming there is not special circumstances render you the right to interpreter provided by USCIS, you must bring an interpreter if you do not speak English well enough to be interviewed in English. Your interpreter must be fluent in English and a language you speak fluently and must be at least 18 years old. However, the following individuals cannot serve as your interpreter.

·       Your attorney or representative;
·       A witness testifying on your behalf at the interview; or
·       A representative or employee of the government of your country.

What happens if I lie during my asylum interview? 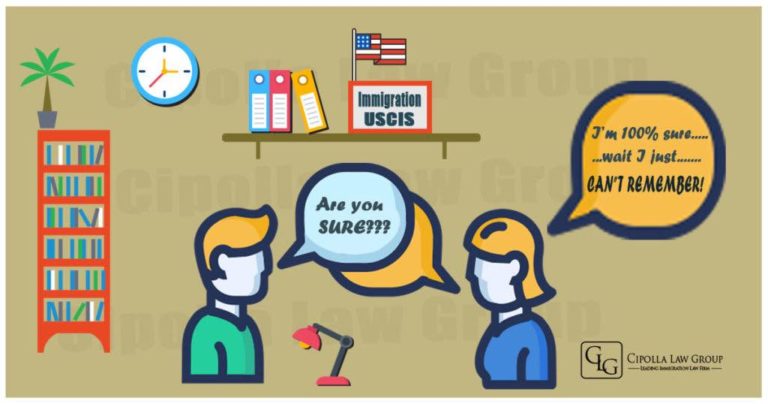 An Asylum interview can be intimidating and nerve wracking but a positive result is worth all the stress and legal preparation.  In preparing for an asylum interview or application, one must not provide fraudulent or false information as the consequences can be extremely serious.  Foreign nationals who seek immigration protection via Asylum in the United States must comply with not only the immigration laws but be truthful throughout the asylum application process. Generally, an asylum application will be denied if you:

– knowingly made a frivolous application for your asylum; or
– knowingly and willfully falsify or conceal a material fact; or
– submit false documents.

Asylum applicants must understand that if he/she is found to have knowingly made a frivolous application for asylum, the applicant will be permanently ineligible for any benefits under the Immigration and Nationality Act (INA).  Moreover, if Applicant knowingly and willfully falsify or conceal a material fact or submit false documents, the asylum application will be denied, and Applicant may be subject to criminal prosecution and removal proceedings.  The US immigration and law enforcement agencies including the USCIS, ICE and the FBI all thoroughly investigate Asylum applicants’ backgrounds for validity.  It is therefore, very important to make sure you remember your facts correctly and always be truthful during your asylum interview and application.

Nominated as Top 10 Best Immigration Law Firm, we have over 30 years of combined experience helping immigrants to make America their homes. We have excellent approval and reasonable fees. Call 773-687-0549 or contact us for a consultation. We speak 中文, español, français, italiano and Portuguese.

Withholding of Proceeding as an alternative to Asylum

A similar and alternative form of relief to Asylum whereby successfully proving the form of relief does not lead eligibility for permanent residence, however employment authorization may be applied for. To establish withholding of removal relief you must prove that it is more likely than not that your life or freedom would be threatened on account of race, religion, nationality, membership in a particular social group, or political opinion in the proposed country of removal.

Protection Under The Convention Against Torture (CAT) as an Alternative

CAT protection is established under Article 3 of the United Nations Convention Against Torture, an International Treaty. CAT protects and obligates the United States and other Member countries to protect aliens from being returned to countries where they would more likely than not face torture. You must prove that more likely than not that you would be tortured if removed to a specific country. CAT does not make the you eligible for permanent residence, however you may apply for employment authorization.

At Cipolla Law Group, we have over 30 years of collective experience representing foreign nationals including asylum seekers pursuing their immigration status in the United States.  If you are in need of an Asylum application, please call (773) 687-0549 or contact our Chicago Asylum Immigration lawyer online for a consultation. Our immigration attorneys speak Spanish, Chinese, French, Italian and Portuguese.