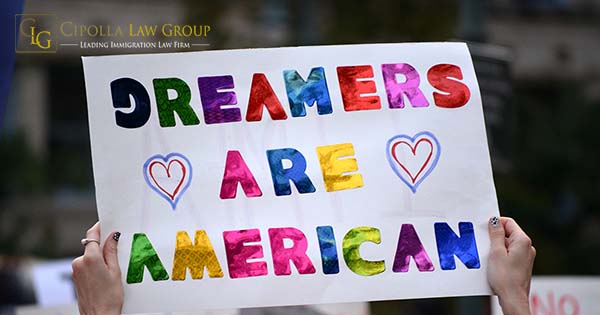 Since 2001, the Development, Relief, and Education for Alien Minors, or DREAM Act, has been stagnating in Congress. Essentially, this bill aimed to grant permanent residency to eligible immigrants who are:

Since 2001, the Dream Act have changed numerous times as different versions of the Dream Act was introduced in Congress. While there were differences in each proposal, they all shared the same idea of providing DACA recipients a pathway of legal status. Fast forward to 2021, the Dream Act of 2021 was introduced on February 4, 2021 in the Senate by Senators Dick Durbin and Lindsey Graham. The bill would provide Dreamers, Temporary Protected Status (TPS) holders and individuals with Deferred Enforced Departure (DED) with protection from deportation and an opportunity to obtain permanent legal status in the United States if they meet certain requirements.

DACA is good for the economy

Rather than examine the DREAM Act from an ideological perspective, this article will explore the economics of the DREAM Act; both the benefits in economic growth, as well as the overall cost of passing this controversial piece of legislation. Using data collected by the Congressional Budget Office, The Center for American Progress, and the North American Integration and Development Center (NAID) at UCLA, this article will highlight the positives and the negative aspects regarding the economic impact of this legislation.

Enacting the DREAM Act would have three major positive effects on the economy:

IRS estimates that about 6 million unauthorized immigrants file individual income tax returns each year. Research reviewed by the nonpartisan Congressional Budget Office indicates that between 50 percent and 75 percent of unauthorized immigrants pay federal, state, and local taxes. If enacted immediately, the Dream Act could grant conditional permanent residency to nearly 2.1 million undocumented youths. This large number of people entering the workforce would affect federal revenues in many ways, especially considering eligibility for some refundable tax credits, Social Security, and Medicare benefits would be inherent in the bill’s enactment. According to a study done by NAID, allowing these 2.1 million immigrants legal status would generate $3.6 trillion over a 40-year period.

Social Security and Medicare benefits are a major point of contention in the DREAM Act debate. Since these benefits would become available to nearly 2.1 million people, it is necessary to examine how that number will impact the systems in place. Because the DREAM Act would affect a large population of relatively young people, their projected impact for the 2011-2020 period is extremely minor.

Young people are generally healthier, and therefore require less medical care. The CBO used information form the Current Population Survey to project that only 0.2% of the population affected by the DREAM Act would qualify for Social Security in the 2011-2020 timeframe. Because of the overall low number of DREAM Act eligible people who would require Social Security or Medicare from 2011-202, the CBO estimates that the bill would boost Medicare outlays by $29 million, and Social Security outlays by $77 million1. Due to these increases, as well as the sustainability of the program as supported by application fees as determined by the Department of Homeland Security, the overall impact of the DREAM Act is estimated to reduce federal deficits by around $1.4 billion over the 2011-2020 period. Beyond the federal economic effects, the increases in legally authorized workers in the economy provided by enactment of the DREAM Act would also impact the national economy. The NAID report estimates that this could lead to income generation of nearly $3.6 trillion in current dollars.

When higher skilled workers enter the economy, they in-turn have more income to spend, and more income that will be taxed. According to the Congressional Budget Office report on the cost estimate of the DREAM Act, the bill would lead to increased reporting of employment income, which would add to the receipts from both social insurance taxes and individual income taxes3. Increased reporting would also lead to larger tax reductions by businesses for labor compensation, which would reduce profits. However, due to the corporate and non-corporate nature of businesses, these deductions would reduce both corporate and individual tax receipts, offsetting some of the increases that will occur4. According to the Joint Committee on Taxation (JCT), the overall impact on revenues would be a $2.3 billion increase in the 2011-2020 period.

Although these figures paint a mostly positive picture of the economics of the DREAM Act, there are a few important caveats that should be mentioned. Although nearly 2.1 million immigrants will be eligible if enacted, estimates on the anticipated number of eligible immigrants who will successfully attain conditional permanent resident status say the number will be much lower. A 2010 report by the Migration Policy Institute claims that if current trends continue to mirror past trends, around 38%, or 825,000 eligible immigrants would successfully gain lawful permanent resident status5. Another major issue concerns what will happen after 2020, and in the future as DREAM Act participants become older and therefore more reliant on Medicare and Social Security. The CBO estimates that the bill would increase projected deficits by nearly $5 billion in at least one of the four consecutive 10-year periods starting in 2026, and there is a lot less specific data available as to what the long term consequences might be. In many ways, the short-term gains of the legislation make the DREAM Act extremely appealing to a slowly recovering global economy, but many feel that the economic uncertainties of the strain it could eventually place on social security nets is too great a risk. This is a common issue when discussing social policy changes, and can be counteracted with consideration.

Regardless of the political opinions that encompass the current Congressional debate, or lack thereof, over the DREAM Act, there are obvious economic factors that must be taken into consideration. A bill that would introduce such a large number of lawful permanent residents to both our economy and our nation, should not be taken lightly. Moving forward, Congress must consider the implications of research such as that presented by the Congressional Budget Office when reviewing this historic and controversial piece of legislation.

Batalova, Jeanna, and Margie McHugh. “DREAM vs. Reality: An Analysis of Potential DREAM

The Economic Benefits of Passing the DREAM Act. Center for American

Delroy Sergeant. “No DREAMers Left Behind: The Economic Benefits of Passing the