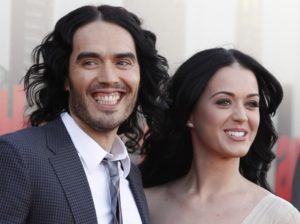 Russell Brand and Katy Perry’s current divorce and hypothetical effects on Russell Brand’s immigration status.  As we all know, Katy Perry is a famous pop singer and to my knowledge a US Citizen.  Russell Brand is an actor and comedian from England who married Katy Perry in October 2010.  The marriage attracted quite a bit of publicity as they are both young and famous in their own right and in their own country – United States and Britain.  So based on Russel Brand’s background as a foreign national in the United States, what immigration options does he possibly have?

EB1 Extraordinary Ability Green Card
Let’s assume that Russell did not file for a National Interest Waiver or EB1 based on Extraordinary Ability.  Whether Russell’s past performances are “extraordinary” is debatable.  However, as an immigration lawyer that works on all type of employment and family based immigration cases, I am confident of getting his EB1 Extraordinary Ability approved.  Even if the Examiner did not like Russell Brand’s past performances, given Brand’s starring roles in high profile movies such as Saving Sarah Marshall and Get Him to The Greek, and Arthur as well as his past awards including Best Live Stand Up in the British Comedy Awards it would be a strong case to prove that Russell Brand does have extraordinary ability as an actor and comedian.

O-1 Visa
On the other hand, marriage to a US Citizen is generally a smoother and quicker process provided the beneficiary/applicant is already in the US on a different non-immigrant status such as an O-1 visa or an H1B visa.  In Brand’s case, he would likely be eligible for an O-1B visa which is for individuals with an extraordinary ability in the arts or extraordinary achievement in motion picture or television industry.  In the event Russell Brand was on an O-1 visa, it would be important to make sure there are not any intent issues.  Although O-1 visas do not statutorily allow duel intent, generally they do not require the Applicant to maintain a residence overseas.  So in effect, O-1 visas are thought to allow duel intent.  However, you need to discuss this with your Immigration lawyer before taking any actions such as adjusting status from O-1 status to permanent resident status.

Adjustment of status from O visa to EB1, or Marriage based Green Card
So let’s review, if Russell Brand was on an O-1 visa living in the US with his bride, Katy Perry, a US Citizen, what are his immigration options?

1. Do nothing, stay in the US temporarily on an O-1 visa making sure to comply with the requirements of the O-1.  This is assuming Russell Brand would not like to live in the US permanently;

2. If Russell Brand wants to live in the US permanently, file for an EB1 Extraordinary Ability.  This can be a rather involved process, however with Premium Processing it’s conceivable that the case could be approved within 15 calendar days.  Not likely as even the strongest of cases generally have requests for evidence which delay matters several weeks to months.

3. Marriage Green Card – Adjustment of Status Process.  The processing time for marriage green card cases, as an Immigration Lawyer that works on a lot of marriage green cards, my standard response is the processing time depends on the office adjudicating the case.  Since our immigration law firm is based in Chicago, I compare the Chicago USCIS office frequently which currently averages between 90 and 120 days.

Removal of Conditions – Conditional Green Card
Let’s assume that Katy Perry and Russell Brand wanted to proclaim their love to the US and decided to pursue the marriage green card (ie. conditional residency through adjustment of status).  And let’s assume that Russell’s case was approved in January 2011 since they married in October 2010.  Russell would be in an interesting situation.  Couples that are married less than 2 years receive conditional residency and need to apply to remove the conditions of the green card 2 years after approval.  So January 2013 would be Russell Brand’s deadline, and he could file 9 months prior to January 2013, around October 2012.  If he and Katy Perry are divorced and Russell Brand wants to live in the US permanently, what are his options?

Removal of Conditions after Divorce
1. File an application to remove the conditions.  However, due to the divorce after issuance of the conditional green card, a waiver maybe needed to prove that Katy and Russell entered into their marriage in good faith and it just didn’t work out.  Essentially proving that they were in love and their original marriage green card adjustment of status case was not a sham marriage.  The waiver is a discretionary form of relief, so it is essential to submit strong evidence and be properly prepared by an experienced immigration lawyer.  Also, he would not want to have one of his past temper tantrums with Katy Perry and make sure he is on good terms with her so that maybe she will cooperate and support his waiver filing.

A point of this article is that divorce can have a significant impact on a person’s immigration status.  And it’s wise to consult with an Immigration Attorney about the effects, pro’s, and con’s of various options that may be available.