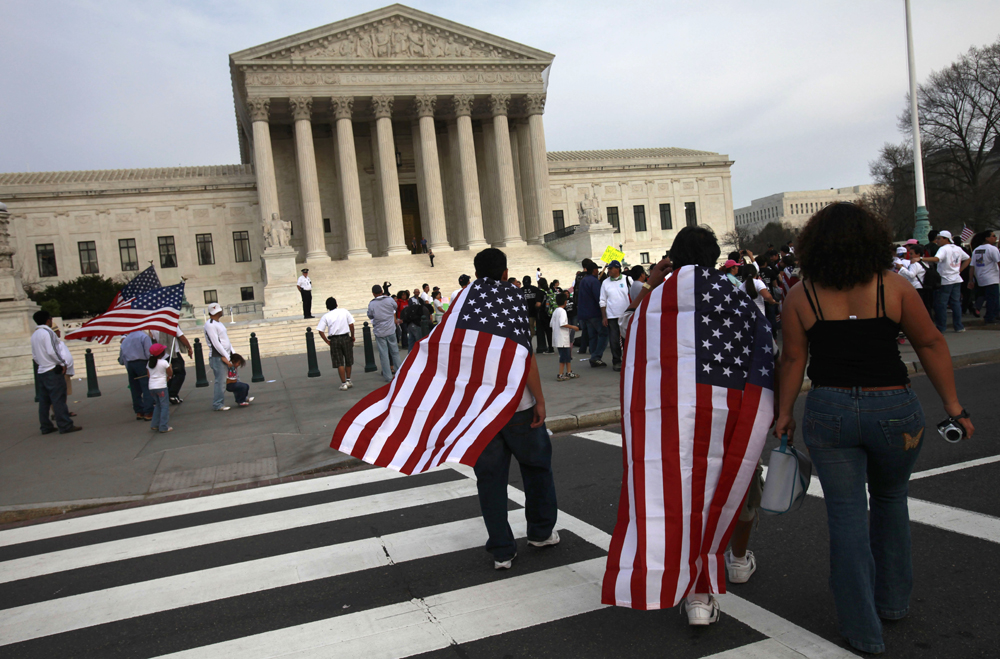 The Immigration Reform 2013 debate, or rather “fight” is forming its foundation after having been lingering as a broken system for years.  This lingering has unfortunately been the cause of politics as opposed to doing what’s right for the country.  There have been repeated attempts to fix the system but unfortunately a lack of follow through by Congress.  No example makes this clearer than the frequent attempts by President George W Bush to repair the broken immigration system during his eight years as President.

President Bush attempted to secure the borders, create a guest worker program, add more H1B visas, and most notably pass Comprehensive Immigration Reform.  Love his politics or hate his politics, he at least tried to address the problems but ultimately failed at each attempt by the resistance in Congress.  For a list of some of President Bush’s speeches on Immigration, Ontheissues.org has compiled quotes from President Bush’s speeches regarding Immigration seen in this link.  In 2007, President Bush proposed Comprehensive Immigration Reform where it was shot down in the Republican Controlled Senate.  37 Republican Senators, 15 Democrat Senators, and 1 Independent voted against the bill.  Everyone can likely agree that the U.S. Immigration system is in need of repair and has been for many years, well maybe accept Congress who seems to like the status quo.

Immigration Reform for the Undocumented Immigrants

Currently there are an estimated 12 million undocumented Aliens in the U.S., a huge backlog of pending Immigration petitions, a shortage of available work visas for skilled workers, a system that deters some of the best and brightest from coming to the U.S., a broken border, and the list can go on and on.  Just read some of my other articles, as an Immigration Lawyer it is very frustrating as Immigration is likely an easy and quick fix, if only politicians would not put politics ahead of people and business.  Immigration Reform is not just about undocumented workers, but also about keeping America competitive and a place that continues to attract some of the best and brightest from around the world as well as a symbol of humanity for the world.

Some of the problems for skilled workers are arbitrary caps on skilled worker visas such as H1B visas, a backlog for skilled worker green cards such as EB2 and EB3 green cards, arbitrary and subjective standards for Investor visas and corporate transfer visas such as E2 and L1 visas.  For family based immigration, 12 million undocumented workers is proof enough, the cause likely because there just are not available immigration categories for the majority of persons in the U.S. illegally and face no other choice but to circumvent Immigration laws (i.e. for a an U.S. Citizen wishing to sponsor a sibling from Mexico there is a 16 year wait period.  Or for someone from India that is a permanent resident and would like to bring their spouse to the U.S., there is over a 2 year wait period. These problems and the likely causes are simple that have simple solutions.  However, politics are put above solutions; the signs are for the status quo for 2013.

Immigration Reform: A fight between two parties or…light at the end of the tunnel?

On the one hand I love that the discussion on Immigration Reform is starting to take front and center, or at least next to the Fiscal Cliff debates.  In the past couple weeks you have had President Bush stating in a speech  ‘As our nation debates the proper course of action relating to immigration,” he said, “I hope we do so with a benevolent spirit and keep in mind the contributions of immigrants.‘  Additionally, you have the White House on behalf of President Obama pointing to the president’s remarks at a post election news conference, in which Obama said he would turn to immigration very soon after the inauguration. Clearly the leaders of both parties are going to encourage a debate on Comprehensive Immigration Reform.  On the other hand, I am concerned that the tone is going to be politicized, especially in a bipartisan manner.  The signs are there.  For example, Eliseo Medina, secretary-treasurer of the Service Employees International Union stated that the “president can’t guarantee us the outcome but he can guarantee us the fight”…. “We expect a strong fight.” (Emphasis Added)  Do we really need a fight?  Can’t we discuss and get a sensible solution to a pretty straightforward problem?  It seems fighting with one another for political gain will take us away from a solution.  In the past it was primarily Republicans in Congress putting up fights as opposed to solutions, however given the results of the recent election, the Republicans appear to be motivated to solve the problem.  Hopefully Democrats work with Republicans on this issue as opposed to finding ways to make each other look bad.

Other discouraging signs are where the Senate Democrats blocked the Republican backed STEM Bill, which would have given the permanent resident visas, also known as green cards, to immigrants who obtained master’s or doctoral degrees (PHDs) in the so-called STEM fields, science, technology, engineering and mathematics. To avoid increasing the overall number of visas available each year, the measure would free up existing visas by abolishing an annual lottery (a.k.a. green card lottery) that distributes green cards to foreigners from countries with traditionally low immigration to the United States.  On the one hand, the Diversity Lottery which is based on arbitrary luck likely isn’t that important of a bill, but on the other hand, why can’t Republicans just compromise and just flat out create more green cards for STEM workers as opposed to take green cards from another bill.  Again, it’s likely bipartisan politics or at a minimum just politics.   Either way it is not constructive to the debate and does not fix an easy problem.

You might ask what is the solution to the problem?  My past articles have proposed a myriad of very straightforward solutions.  Below are just a few, there are many more issues that need fixing.  Feel free to email me some of your ideas as well.

In conclusion, it’s exciting to hear Immigration be discussed by prominent leaders from both parties.  It’s a very simple problem that has been over complicated and requires simple straightforward solutions, regardless one’s political views.  Political leaders should be encouraged to come together to solve the problem and not fight.

If you are in need of consulting with an experienced Immigration lawyer in Chicago, please contact Cipolla Law Group for a consultation. We have over 25 years of combined experience and excellent track record of helping individuals and businesses to obtain their green cards and visas in the United States.