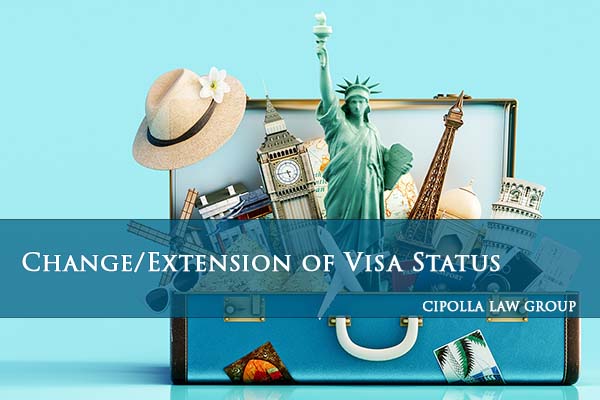 Change of Status or Extension of Status in U.S. Immigration refers to the process of modifying or transforming a current nonimmigrant status within the United States. It can also refer to changing from one type of immigration status to another, such as from a B1/B2 tourist visa to an F-1 student visa; or extending a B1/B2 tourist visa longer than it was originally permitted. This process is undertaken by submitting an application with U.S. Citizenship and Immigration Services (USCIS).

Change of Status vs. Extension of Status

Change of Status and Extension of Status in Chicago, IL (U.S.)

A change of status, on the other hand, is typically requested when someone wishes to change from their current nonimmigrant classification to another type of visa or authorization. In most cases, this also requires that the applicant leave and reenter under their new classification in order for USCIS to approve their request. There are some exceptions to this general rule, such as those who are seeking to change status from student to worker, but these are rare cases.

Therefore, an extension of status is mainly used for those who wish to stay in the United States beyond the expiration date of their current visa or authorization document without having to depart and reapply; while a change of status is generally used by those who wish to switch categories altogether. Both processes have specific requirements that must be met before approval can be granted by USCIS.

Question:
If I apply for a tourist visa (B visa), will I be able to eventually obtain a green card?

Temporary visas can sometimes be a good start to legally living in the United States before applying for permanent residence. For example, a fiancé visa can quickly lead to a conditional green card through marriage. A marriage visa can also lead to a green card. Some temporary work visas can lead to a employment based green card through proper planning and application. However, it is always important to keep the issue of “preconceived intent” in mind.

Change of status from B visa to F1 student visa

In some visa applications such as tourist visas (B-2 Visa) the visa applicant’s intent must be such that they intend on returning home and do not intend on staying in the US. When an applicant tries to adjust status from a B2 visa (tourist visa) to a F1 Visa (Student visa), the USCIS will look very closely at the applicant’s intent at the time of filing for a tourist visa application. If the USCIS concludes that the B visa holder intended to gain admission to the U.S. as a student as opposed to visiting the U.S. as a tourist, the change of status to F-1 student status will be rejected and a visa fraud will be presumed.

Change of status from F1 Student visa to H1B visa

Another common preconceived intent is adjusting status from F-1 Student Visa status to permanent residence or green card status immediately upon entry into the US on a student visa. In contrast, a work visa such as a H1-B visa has “dual intent” allowing a H1-B holder to adjust status to lawful permanent resident status. Common ways to obtain a green card from an H1-B are through an employment based green card or marrying a US citizen and adjusting status as an immediate relative. Once you are a lawful permanent resident after waiting the requisite amount of time and complying with other necessary requirements you will eventually be able to naturalize to a US citizen.

The main point is that there is much interplay between non immigrant (temporary visas) and immigrant visas (permanent residence – green cards). Through proper planning and application, your immigration goals can be achieved, sometimes all at once, and sometimes one step at a time. But how you execute the plan is as important as the plan.

This site uses Akismet to reduce spam. Learn how your comment data is processed.