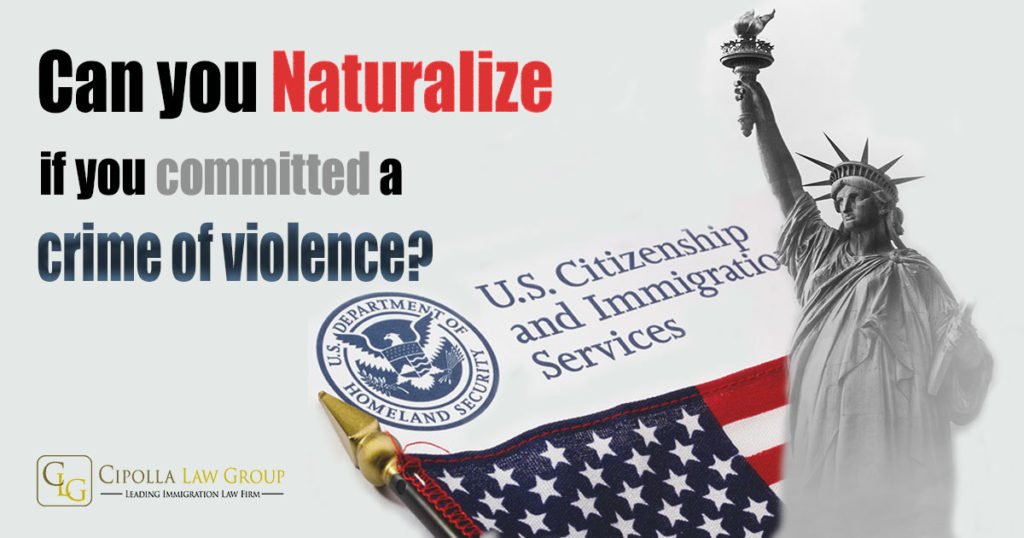 Can you file for naturalization if you have a criminal conviction?  According to the Immigration and Nationality Act (INA), lawful permanent residents (green card holders) who have been convicted of an “aggravated felony” on or after November 29, 1990, are permanently barred from establishing “good moral character” for naturalization.  Since having a “good moral character” is one of the key requirements for a nationalization petition, if you have committed a crime that is considered very serious such as an aggravated felony, you may not be eligible for U.S. citizenship through naturalization petition.

Can I get citizenship with criminal record?

When you apply for naturalization to become a U.S. citizen, you will have to proof that you are a person of “good moral character”. You will need to disclose any and all arrests, citations, detentions, charges, and convictions, for any crime or offense—including traffic tickets. While not all of these records show the lack of “good moral character”, however if you have been convicted of a crime that is serious such as an aggravated felony, you may be punished by being deported and/or barred from ever becoming a U.S. citizen no matter how long you have previously resided in the United States.

You cannot become a U.S. citizen if you have been convicted of certain crimes. The types of crime that will affect you not having the “good moral character” that immigration requires. Below are a list of crimes that are commonly affect citizenship that will either permanently or temporarily bar you from establishing “good moral character” for naturalization:

How can an *Aggravated Felony affect your Citizenship?

An aggravated felony conviction will bar you permanently from establishing the required good moral character for naturalization. The term “aggravated felony” includes “a crime of violence (as defined in section 16 [of the INA] …) for which the term of imprisonment [is] at least one year.”  INA’s definition of a “crime of violence” is divided into two parts:

“(a) an offense that has as an element the use, attempted use, or threatened use of physical force against the person or property of another, or

(b) any other offense that is a felony and that, by its nature, involves a substantial risk that physical force against the person or property of another may be used in the course of committing the offense.”

Section 16(a) is known as the elements clause, while section 16(b) is referred to as the residual or catch-all clause.  In Sessions v. Dimaya, the Supreme Court held that section 16(b) is unconstitutionally vague.

In a Supreme Court case Sessions v. Dimaya, James Dimaya is a native of the Philippines who was admitted into the United States in 1992 as a lawful permanent resident of the United States.  Dimaya was convicted twice for first-degree burglary under California law, neither of which involved violence.  After his second offense, the U.S. government sought to deport Dimaya as an aggravated felon.  An Immigration Judge and the Board of Immigration Appeals (BIA) held that California’s first-degree burglary is a “crime of violence” under section 16(b) and thus, Dimaya could be deported.  The Ninth Circuit, relying on Johnson v. United States, 756 U.S. ___ (2015), held that section 16(b) was unconstitutionally vague.  The Supreme Court granted certiorari, and adhering to their analysis in Johnson, affirmed the Ninth Circuit’s decision.  Dimaya’s case will now return to the BIA.

The Supreme Court’s decision did not automatically grant Dimaya the right to stay in the United States as a lawful permanent resident. It determined that the catch-all clause in section 16(b) is unconstitutionally vague. The BIA will need to redetermine whether or not Dimaya should be deported.

What this Means for Lawful Permanent Residents Who Want to Naturalize?

Sessions v. Dimaya has opened the possibility for naturalization for lawful permanent residents who have been convicted of an aggravated felony.  As mentioned before, an applicant who has been convicted of an “aggravated felony” on or after November 29, 1990, is permanently barred from establishing “good moral character” for naturalization no matter how long the applicant has previously resided in the United States.  Aggravated felony includes crimes of violence.  Since the catch-all clause of section 16(b) has been held to be unconstitutionally vague, the definition for crime of violence has been limited to the elements clause of 16(a): “an offense that has as an element the use, attempted use, or threatened use of physical force against the person or property of another.”

After Sessions v. Dimaya, if a permanent legal resident has been convicted of a crime not involving violence, he/she may be able eligible for naturalization because the crime may not constitute a crime of violence as defined by section 16(a) of the INA.  Accordingly, the crime may not be an aggravated felony and the applicant will not be barred from establishing “good moral character.” However, like Dimaya, a permanent resident with a criminal history is not immune to deportation and should seek help from an immigration attorney if considering naturalization.

When should I hire an immigration lawyer?